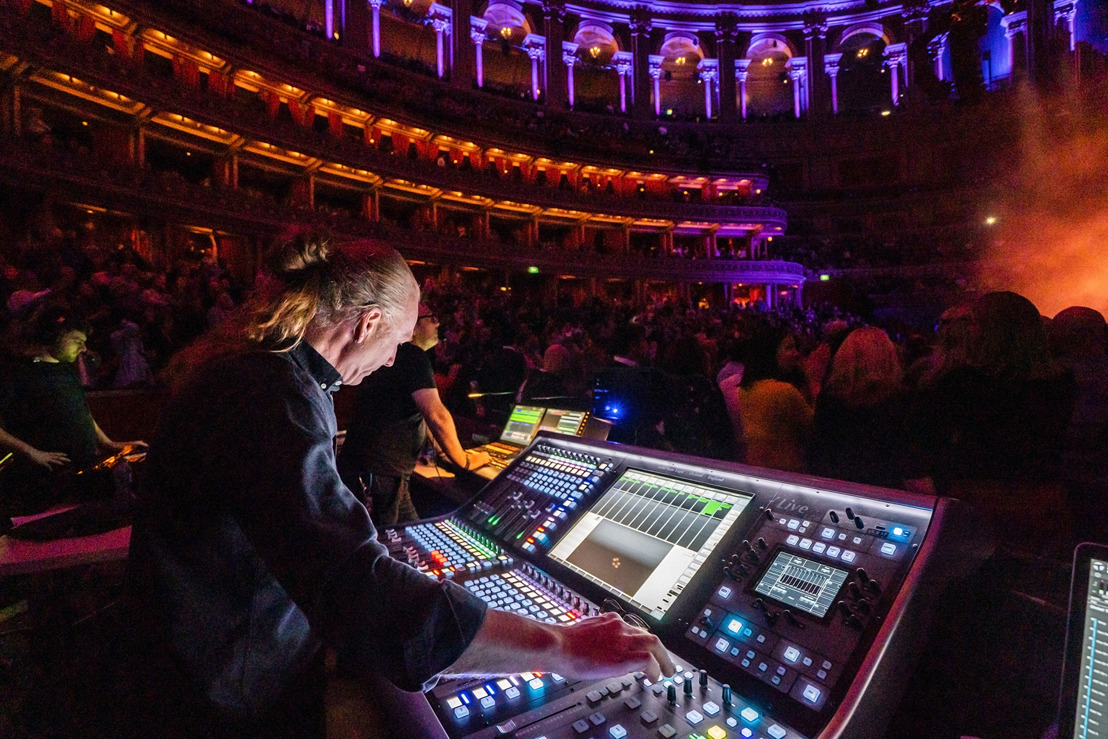 Northern Irish-Scottish rock band, Snow Patrol formed in 1994, rising to fame with their album, Final Straw, which was certified five-times platinum, eventually selling over three million copies worldwide. Their next studio album, Eyes Open, included hit single, Chasing Cars, which is said to be the most widely played song of the 21st century on UK radio.

“It's a 14-piece band and a very open, live stage; the band has reworked songs to a certain extent, so it's a new take, with new instruments on already fantastic songs,” West explains. “Everyone's got a vocal mic, and the guys are all on in-ears, as we're keeping things as quiet as possible on stage.”

When West first heard about SSL's live offering, he was immediately intrigued.

“I knew if SSL was going to put out a live range of consoles, they would capture the trust of the old school analog vibe; once upon a time, you’d do everything you could just to save up to buy one preamp and record everything through it,” he says. “So I looked at what SSL were doing, saw that the L550 had a big screen and big buttons, and being a big-fingered person, little buttons are ineffective for me, so it looked very interesting straight away. I spent a few days just mixing on the board, and I just kind of fell in love with it.”

What West admires about the SSL desk is that he doesn’t need to add any plugins to make it sound better.

“I see lots of people using plugins and bringing all these external things to add to supplement digital desks, but I don't do anything with the L550 other than what's on board, and that's what I love about it,” he declares. “It does everything that I need, and the recent SSL software updates have made it even faster to navigate through internally. It just sounds fantastic.”

In analog world, West was always a fan of subgroups, so the SSL Stem functionality has been a no-brainer for him:

“Being an analog person, I still refer to them as groups, but the SSL Stems work great; I'll always pair up my kick drums, then compress the group just to get some nice closeness; and I'm also using Stems for the strings, the brass, and the acoustic guitars, as there are a lot of them – I simply go in and slap the SSL Buss Compressor across the stereo – it does everything I need it to do, it's beautiful, and keeps everyone gelled together. There are so many backing vocals on this tour that I've separated all of those out too, letting [lead singer] Gary [Lightbody] exist on his own, so I've pulled the backing vocals into one Stem, which I've found has opened up the mix quite a lot.”

According to West, the L550 is very 'honest-sounding' in the EQ section, in that it sounds particularly clean on acoustic instruments.

“I've really got to be able to get in there and nail down some frequencies to be able to try and get the level before they're going to feedback,” he explains. “You can obviously only turn things up so loud to get strings dynamic enough to sit above a decent level band, so you need to be able to get into your EQs and look really closely – and I can hear what I'm doing without any issues whatsoever, whereas with some other consoles, you can find you're trying to find a frequency, so you punch it up, flip it backwards and forwards, and you've almost got to add 15dB to hear what the EQ is doing! With the SSL, you can just do it straight away via the screen; throw it up and move it up and down again, and there it is!”

West describes the desk’s All-Pass-Filter as one of the 'heroes' on the desk, as it allows him to select the frequency specific phase alteration:

“That's amazing, that thing,” he enthuses. “It has absolutely fantastic applications because normally you'd go, ‘okay, let's see if the two kick drums sound better if I punch one of them out of phase,’ but with that, you're either losing clarity, or your punch is gone. Using the All-Pass-Filter means I can just choose which one sounds better, go back to the ALL-Pass-Filter, dial it back to what I liked when it was in-phase, choose my favorite, and then add to it. When I have an opportunity to use it for what it's designed for, I think, ‘How did I ever live without it?’ You can try it out on everything, and it's a very key feature for me.”

“As it’s a digital desk, we don't have to throw everything down the same unit anymore, so if I want a longer tail on a reverb instead of mucking around with one I've already dialled in, or going into scenes and changing stuff that way, I just put another reverb up and dial it in because they all stay warm and rich sounding.”

And the Tape Echo simply 'sounds awesome', he says:

“It sounds really old school, and the combination of that with new technology means that it sounds old on a new piece of kit; it sounds warm and super analog, and it's a digital desk. That to me is pretty unbelievable!”

“That's a great piece of kit; we're using two for the existing setup of the band.  I said ‘Well, I'll just have another 32 SSL preamps please!’ It’s a splitter as well, which is great; we use the MADI out of that to send people the full console breakdown when they need it.”

Ultimately, West says he is just enjoying being able to get hands-on with his mixing and not having to worry about racks of outboard.

“Especially when you get in tight places with difficult load-ins and load-outs,” he says. “We just bring in the desk, and away we go - no racks of kit to set up, it's all there in the console.”