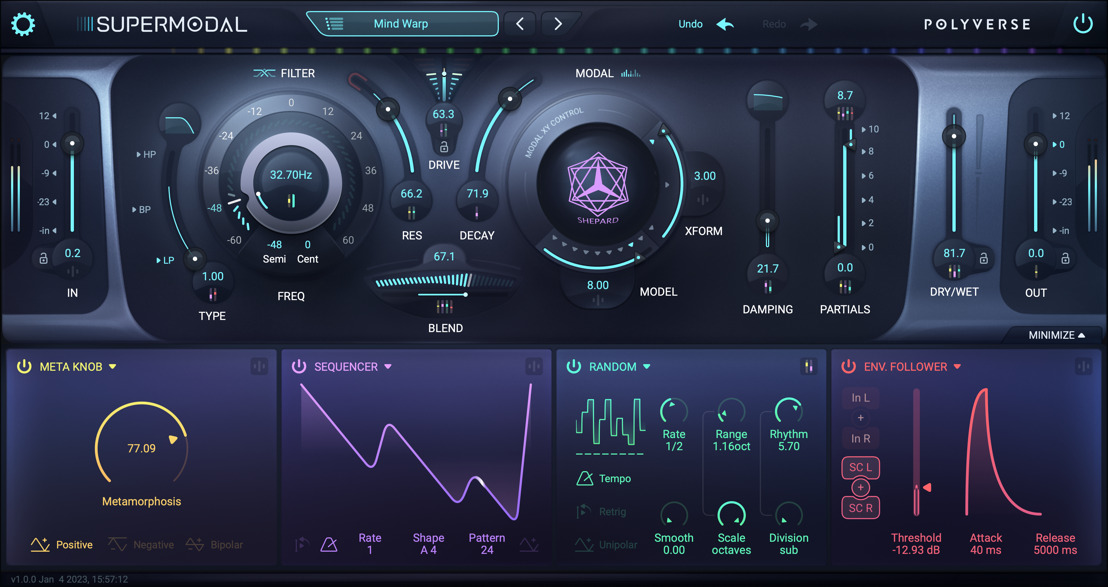 Los Angeles, CA, January 10, 2023 - Polyverse, an innovative plug-in developer known for its creative audio tools that go from the pristine to the extreme, has launched version 1.0.0 of its powerful new modal filter, Supermodal. Supermodal uses hundreds of narrow filter bands working in concert to emulate the resonating qualities of acoustic bodies, both real and imagined, resulting in never-before-possible sonic transformations. With its modal filter working in parallel with a classic zero-feedback state variable filter, Supermodal allows users to shape their audio into a host of attention-grabbing sounds that are at once exciting, unfamiliar, and eminently musical. A discounted public beta release of the plug-in first became available in October, and all beta owners will be granted a free upgrade to version 1.0.0. For new users, Supermodal is available directly from the Polyverse website or affiliate retailers for $99.

“We are pleased to share Supermodal 1.0.0 with both our public beta users and anyone waiting for the right time to jump in and explore this exciting new tool,” says Polyverse C.E.O Assaf Dar Sagol. “This release is the culmination of a lot of dreaming and hard work here at Polyverse. We also extend our deepest thanks to all the users who took the time to dive into the plug-in and share their feedback over the last few months. Your input has been instrumental in helping us refine the Supermodal experience and has contributed to making version 1.0.0 even more fun, inviting, and rock solid than before. We look forward to hearing more from our community as they create wild new sounds the way only Supermodal can. Happy experimenting!”

Supermodal - Two Become One
​At the heart of Supermodal are two powerful filter sections working in tandem. On the left of Supermodal’s interface users will find the Classic Filter, a zero-feedback state variable filter that can morph smoothly between lowpass, bandpass, and hipass filter modes with its ‘Type’ control. It features a fixed slope of 24 db per octave, evoking many well-known analog filters, and is capable of both sweet and chunky filter sounds with the help of a built-in saturation algorithm and input and output controls that allow users to drive it for a fat, musical sound.

To the right of the Classic Filter is Supermodal’s namesake Modal Filter. A ‘meta-filter’ made up of hundreds of resonant bandpass filters, the Modal Filter features 27 different carefully crafted resonation behaviors–or variants– that organize its numerous bands to emphasize various harmonics–known as partials–across the frequency spectrum. These variants are grouped into 9 filter models, which include ‘Vocal Formant,’ with its ‘Ah,’ ‘Ih,’ and ‘Oh’ variants; ‘Struck,’ with ‘Piano,’ ‘Vibraphone,’ and ‘Bell’ variants, ‘Waveform,’ with ‘Saw,’ ‘Square,’ and ‘Hypersquare’ variants, and more. This unique approach to filtering results in transformative sounds unlike anything possible with conventional filtering alone, while ‘Damping’ and ‘Partials’ control allow users to refine the sound of the filter to achieve their desired tonality.

The Classic Filter and Modal Filter are arranged in parallel, combining their outputs for more full-range filtering effects. A ‘Blend’ knob crossfades between them, allowing users to dial in their perfect balance between the two filters’ effects. Supermodal also features a Dry/Wet mix slider, enabling subtler effects that retain some characteristics of the original audio source.

Tactile Control
​As with all Polyverse plug-ins, Supermodal is designed to invite experimentation and discovery. Supermodal’s engaging and versatile user interface exemplifies this ethos with its intuitive and futuristic look. Its trackball-like ‘Modal XY’ control enables users to click, drag, and morph between filter models and variants seamlessly on the fly. Morphing between variants allows users to play Supermodal like an instrument, creating dynamic filtering effects. These transformations can also be automated, modulated, and tweaked via the ‘Model’ and ‘Xform’ sliders for additional precision.

Modulation Madness
​Supermodal features a powerful modulation section sure to be familiar to users of Polyverse’s Manipulator plug-in, featuring four separate modulation slots, each assignable to one of Supermodal’s six modulation sources. These include an Envelope Follower, ADSR envelope, Midi/CV input, Sequencer, Random Generator, and Meta Knob, which can act as a macro for multi-parameter control. Nearly every parameter in Supermodal can be modulated, and the plug-in’s modulation generators can even create cross-modulation by modulating each other for more complex effects. Modulation ranges–easily adjusted with Supermodal’s colorful sliders–can be set to positive or negative values, and each modulation source is switchable between mono and stereo, allowing for ear-catching spatial filter effects.

For more information or to purchase Supermodal, please visit polyversemusic.com/products/supermodal

To join the Polyverse community on Discord, click here

About Polyverse
​Polyverse Music is a “by musicians, for musicians” company that creates uniquely powerful tools and instruments for artists on the cutting edge of creativity. Founded in 2015, Polyverse has continually set the bar in terms of plugin innovation, vision, and user experience. Every person on the Polyverse team is a forward-thinking musician with extensive knowledge and experience with music, sound, synthesizers, and technology. In each new step, Polyverse continues to push the boundary of possibilities with digital musical instruments and effects.