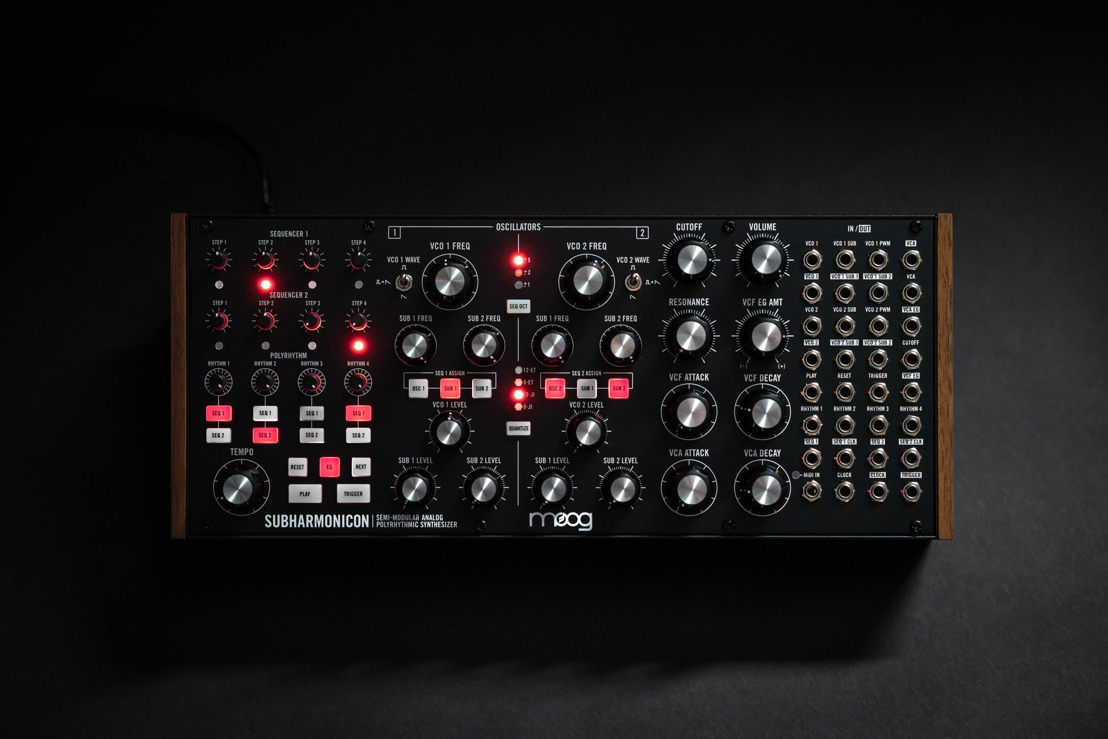 The Moog Subharmonicon is a versatile analog labyrinth of subharmonically derived synthesis and polyrhythmic patterns, equally suited for losing oneself and simultaneously finding oneself through sound. This new semi-modular analog synthesizer is designed for the exploration of sequences that unfold and evolve over time, spiraling through six-tone subharmonic chords and organic polyrhythms.

The newest addition to Moog’s family of semi-modular analog synthesizers (Matriarch, Grandmother, Mother-32, and DFAM), Subharmonicon is capable of complex sounds and patterns, yet is incredibly simple to use. With two VCOs, four Subharmonic Oscillators, two 4-Step Sequencers, and four Rhythm Generators, this new musical machine creates a rich harmonic kaleidoscope that divides into itself until everything that is up becomes down. Although no patching is required to start creating, Subharmonicon can be patched into itself, expanding its onboard capabilities, or interfaced with Mother-32, DFAM, and other external Eurorack-compatible gear for endless possibilities.

Deeper Understandings (The Past Informs the Future)

To design Subharmonicon, Moog drew inspiration from radical theories on music composition that arose in experimental circles during the 1930s and 1940s. Subharmonicon is inspired by Joseph Schillinger’s mathematical systems for musical composition and is influenced by two analog innovations from the 1930s and 1940s: the Mixtur-Trautonium, which employed a series of subharmonic oscillators to generate electronic undertones, and the Rhythmicon (developed by Leon Theremin, the inventor of the Theremin), an instrument capable of sounding multiple harmonically related polyrhythm generators simultaneously. Learn more about these historical instruments and how the past continues to inform the future of sound here.

“A long time ago, when I was in college and first met Bob [Moog], the Rhythmicon came up a couple of times,” recalls Steve Dunnington, Senior Hardware Lead at Moog Music. “One of his other students was into Schillinger…and I’ve always been fascinated by patterns that repeat differently each time…and that’s a thing you can explore [with Subharmonicon]. This instrument was inspired by some of the ideas and musical concepts of Schillinger, such as the idea that by taking a set of pitches and superimposing them on a set of rhythms with a different length will generate rotating musical motives.”

Under Dunnington’s direction, a small group of synth enthusiasts had the chance to discover Subharmonicon’s unique sounds and concepts back in 2018 when an early version of the instrument was first introduced as part of that year’s Moogfest Engineering Workshop. It’s been in high demand ever since, and the instrument is now shipping to authorized Moog dealers worldwide.

“What I love about this instrument is that it gives you a more organic and fluid beat pattern that is off the grid. It is intuitive and yet full of surprises. Schillinger gives us a very fundamental concept of what music is to a human being that I connect with: art is a piece of life itself that we make to reflect our experience.” - Suzanne Ciani

The film’s visuals and narration offer a deeper understanding of the instrument, drawing inspiration from the language and illustrations found in Bob Moog’s old copy of Joseph Schillinger’s book “The Mathematical Basis of the Arts.” Engage your imagination as the rhythmic ping-ponging of Ciani’s score meets Kiernan’s depiction of the evolving shapes, forms, and textures Subharmonicon’s sound creates.

Moog has also teamed up with more than a dozen digital creators, including YouTube content producers Andrew Huang and Look Mum No Computer, to help introduce Subharmonicon to the world. These videos vary from in-depth functionality reviews to original compositions featuring the instrument. Watch them all on this playlist created by Moog.

Each Subharmonicon semi-modular analog polyrhythmic synthesizer is built with love by the employee-owners at the Moog factory in Asheville, NC. Moog authorized dealers worldwide are now shipping this instrument. Connect with an authorized Moog Dealer today to place an order for Subharmonicon and receive the earliest possible shipment.

Subharmonicon is an intensely creative semi-modular analog polyrhythmic synthesizer that uses mathematical ratios to tune its four Subharmonic Oscillators and control the timing of its four Rhythm Generators. Because these tuning and timing values are integer-derived, there is something uniquely coherent about how patterns and phrases created using Subharmonicon blend together musically. As with Mother-32 and DFAM, Subharmonicon conforms to the 60HP Eurorack format; features aluminum rails, finished wood side pieces, and an extensive patchbay; and can perform as a standalone electronic instrument. Learn more here.

Subharmonicon’s characteristic sound starts with two analog VCOs and four Subharmonic Oscillators for a total of six powerful sound sources. Each subharmonic tone is mathematically derived from one of the two main VCOs, giving the resulting chord shapes a beautifully coherent quality. Onboard quantization lets you dial in perfect intervals every time with selections for multiple tuning systems. Choose from contemporary Equal Temperament settings, the heavenly intervals of Just Intonation, or the unlimited freedom of no quantization at all.

Animating Subharmonicon’s distinctive chord shapes is done through a polyrhythmic pair of 4-Step Sequencers. Each sequencer is clocked by any or all of four Rhythm Generators that output mathematical divisions of the master tempo. Layer multiple Rhythm Generators on top of each other to create complex polyrhythms and discover inspiring new patterns and styles. Delve into Subharmonicon’s dual Envelope Generators, Moog Ladder Filter, and analog VCA to call up dynamic articulations ranging from lush pads and blurred edges to percussive plosives and ritualistic rhythms.

Although no patching is required to start creating, exploring Subharmonicon’s modular patchbay unlocks worlds of possibilities as you make novel connections and plug into new ideas. The 32-point 3.5mm patchbay can be patched into itself, expanding Subharmonicon’s onboard capabilities, or interfaced with Mother-32, DFAM, and other external Eurorack-compatible gear (MIDI Type A adapter included for DIN to 3.5mm MIDI input). Use as a standalone synth with included +12V DC power supply or simply remove the front panel to install into any Eurorack system.

More about Moog Music
Moog Music is the world’s leading producer of analog synthesizers. The employee-owned company and its customers carry on the legacy of its founder, electronic musical instrument pioneer Dr. Bob Moog. All of Moog’s instruments are assembled by hand in its factory in downtown Asheville, North Carolina. Learn more here. 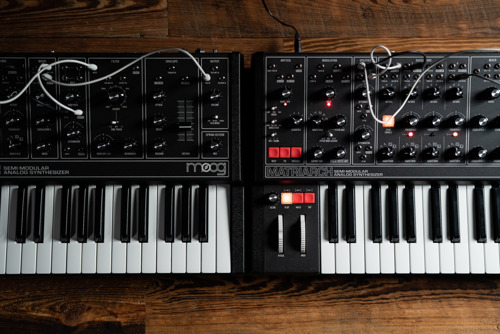 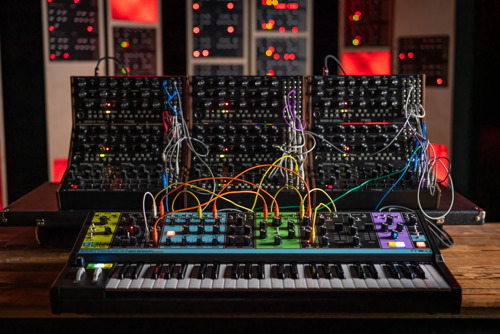 Moog Semi-Modular: Welcome to The Mothership